More Than Crossing A Red Line

Warning: The images in this article may be disturbing to some viewers. Viewer discretion is advised

The Geneva Protocol was put into place on June 7th, 1925 to put a ban on, “…asphyxiating, poisonous or other gases, and of all analogous liquids, materials or devices” and “bacteriological methods of warfare” (Wiki). In the aftermath of WWI, countries across the globe wanted to put an end to the horrors of chemical and biological warfare and for good reason. Chemical attacks were a new horror unseen like anything else before. The agonizing torture and deaths of thousands was seen as a grave crime against humanity. People were permanently scarred, landscapes were devastated, and war was at one point in time as close to hell as it could possibly be.

When you’re almost 7,000 miles away, it’s easy to put the horrors of a war-torn country like Syria into the back of your mind. There’s nothing you can do to make a difference over what is going on. You face real problems that need to be dealt with from day-to-day. News reports show deaths as numbers on an electronic screen. Bits of information irrelevant to our daily lives.

But isn’t this more than that?

Maybe a reminder is in order.

The gas was invented by Nazi scientists in 1938. It attacks the central nervous system with symptoms that include,  “…contracted, pinpoint pupils, foaming at the mouth, muscle rigidity, respiratory difficulty and failure, burning eyes, confusion, drowsiness, weakness, nausea, vomiting and other symptoms of nervous system failure” (Ferguson). It’s almost impossible to detect by being odorless, tasteless and invisible. Victims are only aware of the gas once sickness sets in (Ferguson).

I try not to persuade through emotional means so let me try to put it logically.

Should acts such as this perpetrated by the Syrian Regime be tolerated? Should the slaughter of hundreds of innocent people be essentially ignored by the United States government?

That’s all it really comes down to. Because even if we aren’t in a position to intervene right now, even if it’s a bad time, with a bad president and a bad economy acts such as this should never go unpunished.

I align my trust with someone above politicians, I align it with God. I believe that God has elevated this country as one of the greatest for a purpose and one of those is to serve those in need throughout the international community. 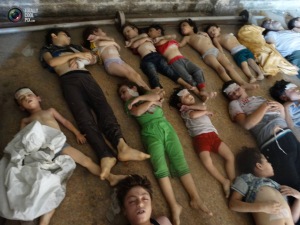 Syria is in dire need.

This is different from Iraq.

This is different from Afghanistan.

At some point you need to say enough is enough.

We made the mistake of advocating the Muslim Brotherhood to take responsible charge of the Syrian government.

This is the consequence of such a mistake.

A carefully coordinated, limited, economical strike needs to be implemented against the Syrian Regime. Nothing on the scale of another war. Just a stark reminder that as long as the United States is a world player, acts such as chemical attacks will not be tolerated.

The Geneva Protocol was put into place for good reason, so that crimes such as these may never occur again unpunished. What kind of message are we sending if we remain complacent with allies too cowardly to do the right thing? The right choice is usually not the easier one and it will far harder on our country for intervening than staying out. Though I know that responding will remind other countries that we aren’t a part of the appeasing crowd that the U.S. has slowly been slipping in with last few years. 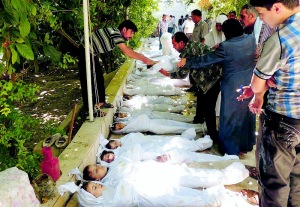 still willing to put up a fight for humanity even if who we are saving come kicking and screaming. I understand that we are not well liked over there but I don’t care. Letting Syria rip itself apart was tolerable until one side went way too far. They did more than cross a red line, they trampled it.

Welcome to the feed. My name is JP. The JP Feed is designed as a host to a league of stories, thoughts, and wonders from the minds of anyone that either is just perusing through or serious readers that want their voice to be heard. Anything from poetry to art to just humorous anecdotes is highly encouraged. Here our main goal is to satiate our hunger for knowledge and ideas.
View all posts by JP Feed »